Ale Senar (Stones Of Ale), Sweden, Scania
There are quite a few other archeological sites in the area.
Standing in the middle of them is a mighty feeling and they are sometimes referred to as the “Stone Henge” of Sweden (as far as i know this is the biggest stone ship, i have a smaller one and some mounds next door though 😉 ).
Ps: Ale is pronounced “Ah-leh”. 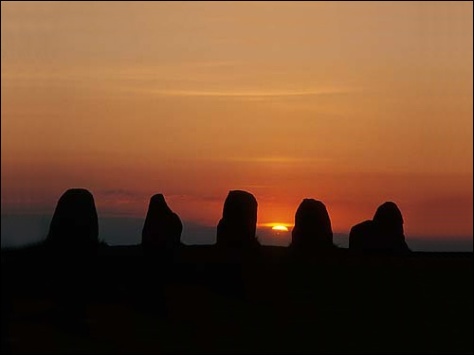 Ale Stenar (The Stones Of Ale),Sweden (Scania)
Ale’s Stones (or Ales stenar in Swedish) is a megalithic monument in Scania in southern Sweden. It consists of a stone ship 67 meters long formed by 59 large boulders of sandstone, weighing up to 1.8tonnes each. According to Scanian folklore, a legendary king called King Ale lies buried there.
The carbon-14 dating system for organic remains has provided seven results at the site. One indicates that the material is around 5,500 years old whereas the remaining six indicate a date about 1,400 years ago. The latter is considered to be the most likely time for Ales Stenar to have been created. That would place its creation towards the end of the Nordic Iron Age.