When I was a child, and dreamed of being a wizard, this is how I thought I would look. Dude looks awesome….and I don’t care what you say, how you feel and look while practicing your magic is important. I know a lot of you non-GD magicians (and some of you lazier GD mages…=)  ) do your work in whatever you happen to be wearing, and that’s fine if it works for you.  I personally think the vestments serve an important purpose; they help to create the proper frame of mind for magical work. When I don my robe and sash, I’m not just my mundane self, I’m myself as Magician–the Magician bit is highlighted and brought to the front.

The Orthodox Schema-Monks are doing it right, ya'll.

Nice article!
Something i often overlook myself nowadays.
I usually wore my Ordo Arcanae grade robe or even did the ceremony naked (depending on its nature) but now i have gotten lazy.

I have heard arguments against robes, implements, titles and so on for some time and to be perfectly honest almost got to a point where lazyness became a virtue (“look mom, no hands”).

The same “free” pagans (in my case ) that would call robes and titles silly and superflous would gladly make themselves a talisman.

Robes, as oppose to God forms, are physical, material. Thus if “like attracts like” any operation with an desired outcome of a material nature should be strengthened by wearing, weilding and navigating among material symbols.

Thus reaching the conclusion that Thaumaturgists should really benefit from it (the Goetic circle and triangle are always physical for example).

Next ritual i will don my robe while playing “Putting on the ritz” at full volume. 😉 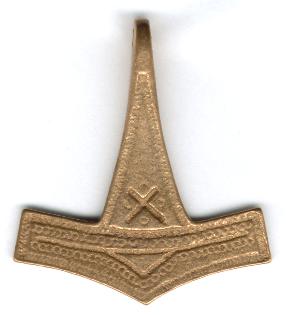 A silver charm in the form of Thor's hammer, Mjollnir, crafted in Uppland, Sweden, during the 10th century. The hammer was named after the thunderbolt with which Thor defended the gods from their enemies, and the ornamentation incorporates a pair of staring eyes. 10th century

Drinking horn. Can (but doesent have to) be used for libations in blot and in Symbel

Key(s). Important as a symbol (as well as ...well,key) for the female authority of the homestead and lands (when the man was away authority did NOT pass to some brother or eldest son but to the wife. Women where often buried with their keys as an object of authority, power and status).Modern Thor Altar

Weapons. Free men (the karls) we expected to bear arms (there where no military or police to turn to). It should be said that an axe or a knife constituded a weapon then as now. Men where buried with weapons. 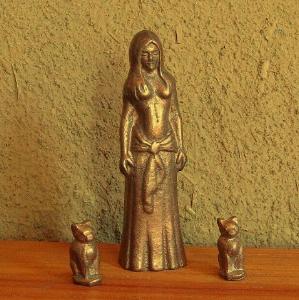 Hammer and Oath Ring. The ring is held during the swearing of oaths.

The Norse people where always a boating people (notice that i´m not saying longship, you dont need them for fishing) Gudvangen, Norway (by scott photos)

Horses has always been important for Germanic peoples.